If you're at all familiar with copper cable, you've probably heard about crosstalk--the phenomenon by which a signal transmitted on one pair or one channel creates an undesired affect on another pair or channel.

Crosstalk causes interference on an affected pair of conductors or overall cable creates errors or prevents data transmission. For example, have you ever heard someone else's conversation while on the phone? This is caused by interference between adjacent telephone wires.

Many Ethernet cable testers can measure crosstalk.  But are you aware of the difference between the near end and far end crosstalk parameters you need to test for in balanced copper network cabling systems? As part of our Cable Testing 101 series, we thought it would be prudent to take a closer look.

At the Near End 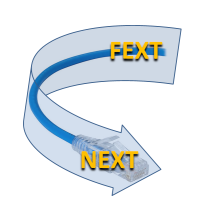 Near end crosstalk (NEXT), is a performance parameter measured within a single link/channel. It measures the signal coupled from one pair to another. The pair causing the interference is referred to as the "disturbing pair" while the pair impacted by the crosstalk is the "disturbed pair."

NEXT is expressed in decibels (dB), and it varies with the frequency of the transmission since higher frequencies create more interference. The higher the dB value, the less crosstalk is received by the disturbed link/channel. For example, a Category 5e cable characterized to 100 MHz might have a NEXT value of 45.8 dB at 20 MHz and a NEXT value of 35.3 dB at 100 MHz, indicating better NEXT performance at the lower frequency.

Pair twists are what help to cancel out NEXT--different twist rates on each pair prevent the pairs from picking up signals from adjacent pairs. That's why it's important to maintain pair twists as close to termination as possible. Twist rates are also optimized for crosstalk performance and isolation has improved with each category of cable. That's why a Category 6 cable characterized to 250 MHz has a NEXT value of 44.3 dB at 100 MHz compared to 35.3 dB for Category 5e at the same frequency.

Power sum near end crosstalk, abbreviated at PSNEXT, is simply a calculation that sums the NEXT measurement of all adjacent pairs. NEXT measures the crosstalk on each pair of a four-pair cable as affected by the other three pairs individually. PSNEXT is simply the sum of the crosstalk of all three adjacent pairs, and it's important because it tells us what the impact is on a pair when used in a network where all four pairs are transmitting signals (i.e., 1000BASE-T).

And last but not least, near end crosstalk testing includes PSACRN--power sum attenuation to crosstalk ratio, near end (previously called PSACR but renamed to distinguish it from PSACRF explained below). Calculated using PSNEXT and insertion loss values (see our previous 101 Series blog on insertion loss), it tell us the difference between each pair's attenuation and the combined crosstalk received from the other three pairs. The purpose is to ensure that received signals are strong enough in relation to the noise in the cable. The higher the PSACRN value, the better the performance.

At the Far End

Far end crosstalk, abbreviated FEXT, is also measured within a channel. It's a lot like NEXT but as its name infers, it is measured at the far end of the channel. However, by itself FEXT doesn't tell us much since signals are attenuated over distance.

To provide a more significant result, the attenuation (insertion loss) is removed from the FEXT result and referred to as equal level far end crosstalk (ELFEXT). In recent years, TIA renamed this parameter attenuation to crosstalk ratio, far-end, or ACRF for short.

Like NEXT, ACRF measurements are summed for each of the three disturbing pairs giving power sum ACRF (PSACRF). This PSACRF parameter used to be referred to as power sum ELFEXT (PSELFEXT) before the TIA renamed the parameter.

So what about alien crosstalk? Once we move to the higher frequencies of Category 6A to support 10GBASE-T applications, we now have to worry about crosstalk between cables, not just within. In an upcoming 101 Series blog we will delve into the alien crosstalk parameters (warning: there are multiple).